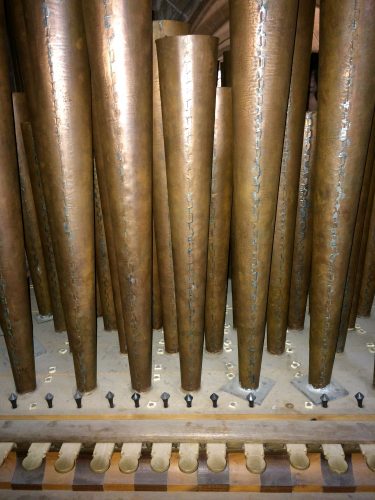 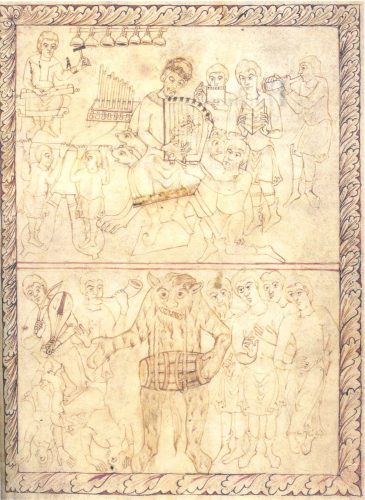 1993 a recreation of a 12th-century organ was conducted at the Abbey of Royaumont following the instructions given by Theophilus (Roger of Helmarshausen) in his De diversis artibus. This project was directed by Marcel Pérès and completed in 1995. The book Les orgues gothiques (Créaphis éditions) was also written in connection to this venture after a colloquium that assembled performers and musicologists. At the moment, the reconstructed instrument is in no playing condition. For this reason its repair is planned for 2018. The need to recover Royaumont’s organ has reopened many questions about organs from the High Middle Ages. A new interdisciplinary approach to the subject is overdue: in the last ten years publications about medieval organs are scarce at best and the last reference book was published in 2004 by Peter Williams (The Organ in Western Culture 750-1250). Furthermore, the much-needed study of the repertoires performed on early organs is still pending.

Pipe organs were some of the most important musical instruments utilized in Western Europe during the High Middle Ages. These instruments were not only valued and praised for their capability of producing sound and music, but also for their symbolic and intellectual appeal: besides being associated with liturgical and celestial music, organs also served as vehicles for the examination of number and proportions.

Fortunately, literary and iconographic sources from the period offer us a wealth of information about these instruments. The sources recordimportant data about their materials, craftsmanship (field of the artes mechanicae), placement in performance settings, pedagogical use, liturgical functions, and even secular practice. The importance of organs prompted important theologians and music theoreticians such as Gerbert d’Aurillac (De commensuralitate), Roger of Helmarshausen (De diversis artibus), and Aribo (De musica) to discuss its construction and pipe proportions. It is also crucial to mention here the treatises about the ars musica (such as Hucbald’s De armonia institutione and the anonymous Scolica enchiriadis) where the notion of number and ratio is examined in connection to the organ, the monochord, and the bells. The symbolism of the organ is elucidated by Gregory the Great (Omnia quae extant opera) and the Venerable Bede (Opera exegetica) who also commented on the instruments’ great suitability for Christian worship. Finally, the instrument’s musical and symbolic role in the culture of the period can be also gathered through the analysis of its representation in treatises, sacred and secular books, and religious buildings.

The purpose of the Symposium « de organis » is to reopen the study of High Medieval organs to shed new light on these important keyboard instruments. To this end a collection of specialists on the fields of musicology, organology, iconography, art history, philology, medieval studies, and performance practice will be invited to study, revise, discuss, and reconstruct organ-related sources.

The symposium will consist of two parts:

During the first section each scholar will present a paper (20-30 min). The information offered will provide a solid platform for a fruitful discussion of ideas conducted by the speakers during the second section. The goal is to interconnect concepts and research methods that will enrich the whole investigation.