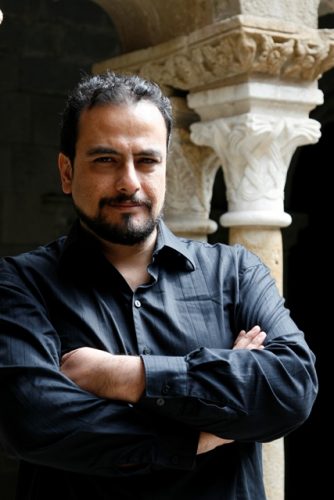 Because of the limitations of the written document in the reconstruction of the past, historians have been utilizing images more and more as historical evidence. Visual information can reveal important details about social structures, history of mentalities, material culture, daily life and of course musical practice. One of the main difficulties faced by those interested in the reconstruction of medieval music is the lack of information that survives about its performance practice. While we have a large number of manuscripts with written music and musical treatises with theoretical explanations about the composition of music, there is very little that these sources reveal about the way in which the different repertoires of the time were performed. However, a thorough study of iconographic sources can give us valuable information about the contexts of performance, musical instruments and their practice, audiences, registers, conventions and even vocal production. In the specific case of  musical instruments, we can gather data about shapes, materials, playingtechniques, combination of instruments and their role in an ensemble, acoustic and social aspects (sound space), response of the audience, and the social status of the instrumentalist. Obviously the study of visual information is complex and needs the support of written sources as well as a great knowledge of the artistic media, the purpose and the audience of every individual piece, theories on symbolism, biblical exegesis and pictorial conventions.

In this course, different iconographic theories and approaches to medieval art will be contemplated in order to enter the subject of musical iconography with enough tools to extract the information that they can offer us. Then there will be a study of different musical representations both in painting and in stone with the help of texts that can clarify their content and information about musical practice. At the end it is expected that students develop different strategies to approach musical representations made during Middle Age in search of detailed information about a practice that has been lost in time.

Dr Mauricio Molina, musicologist and early music performer dedicated to the reconstruction of 11th–13th-century music. He holds a Historical Performance degree from The Mannes College of Music (New York) and a musicology Ph. D. degree from the City University of New York Graduate Center. He is director of the International Course on Medieval Music Performance of Besalú (MMB), of the Seminar on Musicology of the UIMP (Universidad Internacional Menéndez Pelayo), and is a visiting professor at the Centre International de Musiques Médiévales (CIMM). Dr, Molina is also professor of medieval Christian and Islamic Culture and Art at the American university consortium IES Abroad Barcelona. He is the author of Frame Drums in the Medieval Iberian Peninsula (Reichenberger 2010). His upcoming book La canción monofónica secular y religiosa en el Occidente medieval (850-1200) will be published by Dairea in 2019.